DSV releases a page dedicated to FREE resources we have created for the Affinity products: Affinity Designer and Affinity Photo. The releases right now include Layer Styles and Gradient swatches with more to come in the future!

Our President and Founder fell in love with Affinity Designer shortly after it was released. He subsequently spent several hours remaking his custom and most used layer styles from Adobe Photoshop for his own personal use. He enjoyed AD so much found their forums useful, so to give back he released his layer styles for free in the forums.

After gaining more experience working with the program over the next week or two, he rebuilt the layer styles again from scratch so that they were more editable by the user. (Mostly the gradients were now editable) He also created a set of gradient swatches based on the layer styles and created a bonus set of metallic styles to go along with the rest of the package.

One year later to celebrate the anniversary of the initial offering, he created Volume 2 of the Dream Styles series as well as a small holiday set. For the two year anniversary he created a set of gradient sky replacements meticulously recreated from photos he had taken, and a few he admired online.

We plan to release more Affinity resources in the future, so check the affinity page on this site, or look for announcements here on our blog or at the affinity forums. (forums.affinity.com)

How To Install Styles

To install and use the layer styles resources we provide, we recommend the following process: 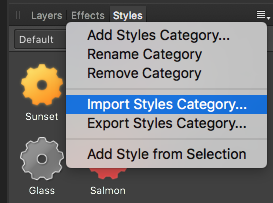 First, click on the "Styles" tab in the "Layers" panel, then click the menu icon and choose "Import Styles Category" as shown in the screenshot at the right. Next, navigate in the browse dialog to the (unzipped) styles that you want to import, select them, then click the "Open" button. Voilá, the styles are imported and available in your Styles Dropdown menu.

How To Install Gradients

To install and use the gradient resources we provide, we recommend the following process: 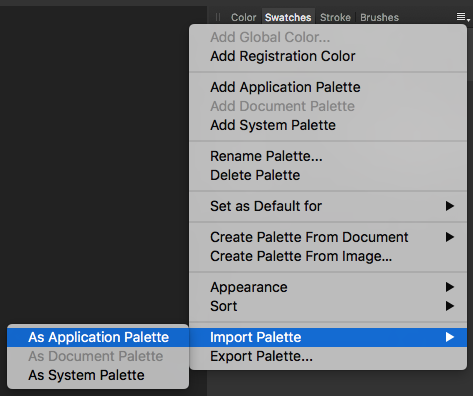 First, click on the "Swatches" tab of the colors panel. Next, click on the menu icon in the top right and choose "Import Palette->As Application Palette". Navigate to the (unzipped) gradient resource you want to import, select them, then click the "Open" button. Voilá the gradients are imported and available to all documents in the Swatches dropdown menu.

Stay Connected With Us